I first dabbled with Trading and Technical Analysis back in November 2012, when I first got into Forex Trading. Back then, I was introduced to an Automated Forex Robot that could rake in passive income of about 5-10% a month, and used a Martingale (doubling) strategy for trading. In less than 3 months, half of my account went bust because I was using too high of a risk-reward setting, coupled with a highly volatile GBP/USD market on the 4th of January 2013.

I did a fair share of Finance courses during my Business studies, and had a basic understanding of the Equity and Forex markets, and thought that I knew what I was doing. But oh was I so wrong! After this setback, I began to learn more about Technical Analysis to supplement my Auto Trading, and more importantly, to really understand what I was investing in.

I continued using the Forex Robot for the next 10 months up till November 2013, as I began to shift out my funds into Bitcoin after finally turning a profit in August. Since then, I have been following Bitcoin more closely, and have been super interested in learning how to trade Bitcoin.

Back when I was learning more about Forex trading, I went to Forex school at Babypips, and learnt some of the fundamentals of chart reading and trading, such as reading candles and trading concepts. Unfortunately, I dropped out somewhere through Elementary School, after they lost me with all kinds of different indicators I could not see the use for. On the other hand, I still do think Babypips is a fantastic resource, especially for beginners who are keen to learn how to trade and better understand the Bitcoin market.

More recently, since I made my first few panic buys and sells and lost some Bitcoins trading, I have been picking up again on Technical Analysis and Trading strategies. I'm not an expert at this, and neither should you take my words as investment advice, but I'm here to share some of my thoughts on Bitcoin trading, and I hope it is of great help to you!

If you have any questions, feel free to tweet me at @onemanatatime.

Learn the Basics of Trading

If you're a beginner trader, first thing you should learn is to read charts. Chart patterns signal to traders that the price of a security is likely to move in one direction or another when the pattern is complete. I'd like to bring your attention three chart patterns that will appear very often. I also took the time to show you how these relate to Bitcoin trading with the charting tools I use on TradingView. Enjoy!

Secondly, another analysis tool I think is very useful, is the Fibonacci Extension. Fibonacci is pretty tough to understand, and more so to chart with Bitcoin due to the lack of available tools which allow for it. But in essence, the Fibonacci sequence is a unique string of numbers which adds the sum of the two numbers before it, and is the deravitive of the Golden Ratio. People like to call them the "magic" numbers, and very aptly so, as they're present all throughout Nature.

Jason Stapleton shares the secret of Fibonacci Trading; that is to understand that Fibonacci (extension) is simply a tool. But when employed properly, and in conjunction with other indicators, it can present enourmously profitable, high reward low risk trading opportunities. Watch his video here:


Lastly, I'd like to share a trading pattern called the Elliott Wave Principle. It emphasizes an understanding of Investor Psychology, and explains why prices fluctuate in zig-zag patterns. If you thought Fibonacci was tough to understand, let's have Babypips put this in perspective. Babypips teaches Fibonacci in Elementary school Grade 3, whereas Elliott Wave is taught in "Summer School". In that sense, Eliott Wave would be a great concept to learn and understand, as a supplement to your foundational understanding. Click on the links above to read and learn more about both theories!

By now, you'd probably be saying: "Sure, these resources all give me a good basic understanding of trading markets, but how does that apply to Bitcoin?" Since learning the fundamentals, I've been looking around for good resources to learn Bitcoin Trading from but with not much luck. Here I'll be sharing some handy videos to guide you on your Bitcoin trading journey.


I watched @ChrisDunnTV's first Bitcoin prediction video on the 6th of December 2013, and the rest of his "How To Day Trade" 5 part series videos. Somehow, I had a gut feeling that he was the ONLY guy trading Bitcoin who actually knew what he was talking about.


Since then, he's made and nailed 5 back-to-back Bitcoin predictions, each with 15-30% profit. Watch his last prediction play out with immaculate precision. Watch the video here: Incredible Live Bitcoin Trading!


Made 15% on my Bitcoin "short sell" listening to @ChrisDunnTV's tip. If you're thinking of trading Bitcoin, don't forget to stop by!
— Alvin Lee (@onemanatatime) December 16, 2013

This is a long one, but here's another great video I highly recommend watching: 60 Minute Stock Trading Blueprint Webinar.

Lastly, I also very much believe in Chris Dunn's trading perspective. I think more than analyzing news articles, or technical analysis, the most important aspect of trading is to understand the market sentiment. Hence, I also want to highlight how many Bitcoin traders are currently looking at certain time frames (e.g. in 12 hours from now) to determine a price for entry. I'd just like say that that's not going to work! Instead of narrow time frames, and random $ amounts; think about Price-Action, Resistance, and Support.


Another piece of advice, is to match the Price-Action of both a long term-time period as well as a short-term one, when trying to make judgement calls. I personally use Bitcoinwisdom.com for reading a chart, and use anything from a 6h to 1d Time Interval for a long-term period, and anything from a 5m to 30m chart for short-term analysis.

My very first prediction about Bitcoin came in my first blog post about Bitcoin hitting $1000 by the end of 2013. I wrote the post on 14 November 2013, and you can read it here: Is the Bitcoin train ever turning back? $1000 by year end?

Then on 28 November 2013, I wrote another blog post about an incoming Litecoin crash. I related the price surge during that time, to the Bitcoin bubble of April's Cyprus fiasco. At that time, I had no clue how to judge resistance and support, but interestingly, the wisdom of crowds (more or less) pulled through with the right answer. Litecoin peaked at $50, before crashing down over 50%. 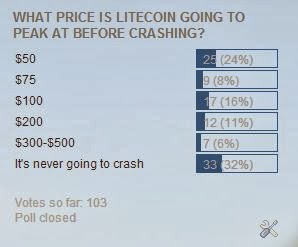 Since I began learning to trade, the added market understanding has given me a better insight into estimating a fair price for altcoins, as well as to judge support/resistance levels to look for entry/exit points. I have made a few spot-on Altcoin predictions of my own over the last weeks, as you can see on my previous blog posts about WorldCoin, NXTcoin, and DogeCoin here and eMunie and EarthCoin here. Follow me on Twitter or my blog to get the latest updates on Altcoin opportunities!

And last but not least, here was my first Bitcoin prediction. Click the link to see how my first prediction panned out on TradingView. I didn't know what I was doing, but I guess that's what they call Beginner's Luck. ;)


Today's Prediction
I think Bitcoin will be looking to retest the $544 support level of Bitstamp, before picking up for a new All Time High. But before we can go the Moon, Earth's gravity is causing a small nosedive into the $650-$720 levels, and I'll enter if my Sell order goes through at $850.


And here's a friendly reminder about following Bitcoin or Altcoin predictions:

also dont reply to my tweets from 8 hours ago saying "thx for the tip, buying now!" are you fucking insane this is a highly volatile market
— CryptoCobain (@CryptoCobain) January 8, 2014


Follow me on TradingView as I create new charts with Buy/Sell opportunities, or Twitter @onemanatatime for the latest updates! Don't forget to enter your vote for the Bitcoin price poll on the right column of this blog. Here's my vote, what's yours? 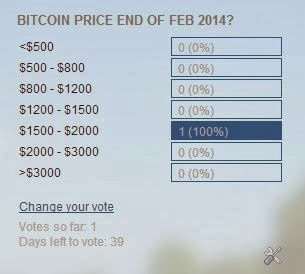 With that, I'd like to end off with this; good luck trading, and HUAT AH! And here's a quote from The Alchemist, by Paulo Coelho.