Insider News and Predictions: Eyes on Quarkcoin & Zetacoin - The Future of Crytpo Currency?

Since I mentioned a resistance/support of $50/$25 for LTC in my post from 2 days ago, LTC prices have found it's support at $23.51, and has risen over the last 4 hours to it's current BTC-e price of about $32. Hold on tight to your Litecoins because I think prices are going to continue going up and break the $50 resistance by Friday, probably earlier. I wasn't thinking of writing a post today, and I still owe you a post about Panic selling/buying & Bull/Bear traps, but I found some interesting topics to write about that will interest you altcoin and crypto junkies.

What really triggered this blog post was a tweet I saw by Keiser, featuring Quarkcoin (QRK) alongside Bitcoin and Litecoin as the cryptocurrenies of choice. I first saw the word Quarkcoin when it broke into the top 10 market cap with over 300% increase in market capaitalization value overnight. 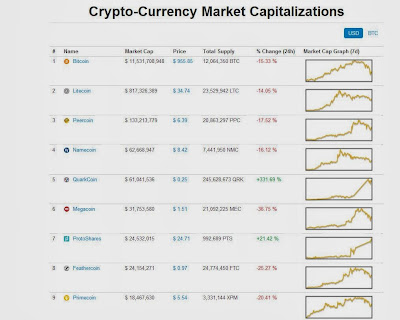 I overlooked it even after seeing it rise from 6th to 5th, until I saw what Keiser tweeted:


If Keiser said it, it has to be worth something. With his reach and influence within the Bitcoin community, we could see a huge jump in Quark prices soon, even if it doesn't have much value. From my research so far, I found out that Quark uses nine rounds of secure hashing from six different algorithms to make Quark transactions super secure. Many programmers have been worried about whether or not the Bitcoin protocol is hackable, but Quark has just made it even closer to impossible by using a mix of algorithms. On the other hand, what intrigues me is that 98.9% of the Quarks have already been mined (see the Reddit discussion here), which makes me wonder how this is a good thing. If you know how this is beneficial to the community, please drop a comment down below! Greatly appreciated!

Apparently the prices surged after a video of Bill Still, a legendary Economics cult figure went viral among the Bitcoin community. What's notable is that Bill will be appearing on a Keiser Report interview, which airs on the 19th of December, so keep your eyes peeled.

And lastly, we could see Quark on a Chinese exchange over the next few days. If this is true, you better get your Quarks as soon as you can!

During my research into Quark, I found out about Zetacoin (ZET). The prices of Zetacoin have increased 550% against the bitcoin, with ZET/BTC prices skyrocketing from 0.0065 at the beginning of 30th November to a peak of 0.055 and is currently hovering around 0.036 at the time of posting (Source: Cryptocoincharts.com). Looking into Zetacoin, I found that it actually has an inflationary characteristic. There are a total of 160 million Zetacoins, and upon the depletion of this initial supply, 1 million additional Zetacoins will be added to the supply every year. This is quite a different take from the limited supply of all other cryptocurrencies, and could be an interesting tweak that can potentially solve some of Bitcoin's existing limitations.

I'm still not entirely sure about the benefit and utility of Zetacoin, but I'm going to jump on the bandwagon and bet on the hype of the Zetacoin, while I do more research over the next few days.

Buy #zetacoins. A million of something doesn't take much increase to make a small fortune. #zetacoin up 80% today
— BitcoinSachs (@BitcoinSachs) November 29, 2013


If you don't own at least 100k zetacoins you're going to spend a life time regretting that
— BitcoinSachs (@BitcoinSachs) December 1, 2013

To buy either of these 2 cryptocurrencies, along with almost any other alt coin out there, set up an account at Cryptsy.com to get started! I only started my account today, and I've had a pretty decent experience so far. Still some problems with the site such as:


I think its just a problem with them being unable to handle the surge in traffic over the last 5 days, and I hope that fix it soon. But apart from these problems, looks really good, and I'm definitely using this over BTC-e from now on.

I hope this post was useful for you. These are my own views and thoughts, which like the Bitcoin market, is largely driven by speculation. Follow my recommendations at your own risk. With that said, to all of you guys holding Quarks and Zetacoins, I'll see you on the moon and give lets China's Chang'e-3 a surprise! ;)