Behind a Cryptocurrency: Marketing & Branding - A case of Quark, Zetacoin, and Megacoin

As I have mentioned in my previous post, there are two main arguments against Quark (QRK).

First of all, the biggest argument lies in the "premining" issue. Let me clarify again, that Quarks were not "premined"! Instead, Quark was launched such that only a small number of early adopters were able to mine a majority of coins within 6 month timespan (99.64% already mined). However, the interesting thing about having almost all the supply out there, is that the price of Quark will stabilize much much faster than Bitcoin. Because Bitcoin will take another 20 odd years to be completely mined out, we could be speculating on the price for much longer than Quark.

Secondly, having a few people own a large number of coins leads to our second argument. How then, can we ensure a fair distribution of Quarks to the rest of the market, following the 6 month accelerated mining period? Sure, we can argue that it's unfair because the early miners get to sell the Quarks for massive profits. But doesn't that also apply to any other cryptocoin? In fact, the issue of fairness is as prevalant in Bitcoin as well as other cryptocoin mining. Bitcoin's mining power is currently being hoarded by the ASIC miners, which in turn gives GPU & CPU miners very little room for profitability. By limiting Quark mining to CPUs only, this can be argued to actually be more beneficial to the community, although it also does bring about a potential problem of Botnets mining from user's computers without their permission.

On another note, besides the technical specifications of each cryptocoin, I have also come to find that there are several other factors that affect a cryptocurrency's adoption, price, and eventual success. This includes:


If we look at Bitcoin, it is clear that first-mover advantage is crucial as we can see with Bitcoin's clear lead in the Cryptocurrency market. However, this is not the only reason behind Bitcoin's success. Looking at the landscape chart below, we can see that the Bitcoin infrastructure is well developed with many services competing in various sectors, who are ultimately cooperating to build an ecosystem currently unrivalled by any other cryptocurrency.

In the context of Quark, the community has also been working hard to build up an extensive infrastructure and network. They have revamped their website to make it look much cleaner, and are already in the midst of launching Quarkspend, an ecommerce platform that uses Quark as currency of choice.

I love the energy coming from the Quark community. The work of the community is commendable, and is a prime example of the power of crowdsourcing. The community, not unlike the currency itself, is decentralized and each individual contributes his expertise with a common goal of developing the Quark ecosystem.

This closely knit group of Quark supporters have bonded together in the discussion forums (Quark Forum, and Quark Talk), and are currently developing an introductory video for Quark under their marketing thread here. Also, a user in the forums, Konrad pointed very aptly that the Quark community needs to:

"find out the path Megacoin took to promote Mega and build on it. Megacoin adds nothing new to Altcoins but look at the price, they are doing their marketing perfectly. Since Quark actually has something new to offer in the world of Cryptocurrency building upon Megacoin's marketing plan will increase the price at least 5x over."

Before we investigate the factors driving the success of MegaCoin, I'll first discuss about ZetaCoin. Like Quark, Zetacoin (ZET) has a supply of 160 million coins that will be mined out within a year, with a "small yearly inflation" (as can be seen here). And as such, will also see a quick consolidation in price, followed by a deflationary price for ZetaCoin. In this sense, we can similarly argue that ZetaCoin is to Quark, as Litecoin is like silver is to Bitcoin's gold. Over the last week, ZetaCoin has skyrocketed to its current 11th position on Coinmarketcap. ZetaCoin's value has grown about 5 fold over the last 4 days against BTC, from a low of 0.012 to a high of 0.12 and a current rate of 0.07. Moreover, the ZetaCoin dollar value has also increased from its sub $0.01 price to a current value of $0.065.

I also like the work of the development and community team at ZetaCoin. Unlike most other cryptocoin communities who use Forums to collaborate on their projects, ZetaCoin uses the Cryptocoin Social Network, Nobs.is, to discuss and develop their marketing efforts. The team is still young and there's still much work to be done, but I believe that they have a strong and motivated community, and are on the right track to making ZetaCoin succeed.

Quark, similarly, has also exploded into 4th place on Coinmarketcap. I still stand by my prediction that Quark prices will soon experience the Keiser Effect. And in the context of the analogy of ZetaCoin to Quark, I do believe that there is a huge potential for ZetaCoin to follow Quark's price. Just saying. 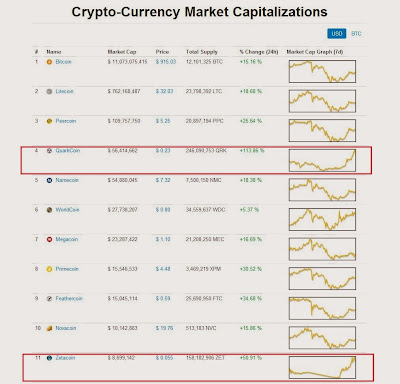 MegaCoin (MEC) launched in June 2013, and is a clone of Litecoin's scrypt crypto. It has a rather interesting specification which generates half of the total 42 million coins in the first 5 months, while the rest will be released over the decades with increased difficulty. The intriguing thing about MegaCoin is that it has climbed to the 7th position on Coinmarketcap in the short time that it has been around. As such, we will take MegaCoin as a case study to explore how the other cryptocurrencies can learn from them to better brand and market their cryptocoins.

With a quick content analysis of the MegaCoin website, we can see a well-built website, with a clean simple design, and full of useful links. Apart from the usual informational and download links, I want to also highlight how they have implemented a "shopping & services" tab to allow users to easily spend MegaCoin, a community link for easy access by users, as well as links to their social media accounts. The website also boasts a wide range of translated versions, with 15 different languages, including English, Mandarin, Korean, and many other European languages. We can also find an active community of MegaCoin supporters on their forum and the Reddit page.

With this, I would like to make a few suggestions for the Quark and Zetacoin community.


I hope this article has helped you better understand some of the external factors that drive a Crytpocurrency's adoption and price. It will also be interesting to also examine and compare the other leading alternative cryptocurrencies. With most of them being simply a fork of or a clone of Bitcoin/Litecoin, I'm really curious about what determines a certain cryptocurrency's price (besides it's technical characteristics). Of course, first-mover advantage is crucial, as we can see with Bitcoin's clear lead. But I have a hunch that the community, branding, and marketing of a cryptocurrency also play a big role in its success.
Posted by aluna at 9:53 PM