Bitcoin right on schedule for 2016 Halving Pump. Oh... and #altsareback

Since my last post, $BTC surged to $500, then had a dramatic dump to $300 before climbing back up to $400. In terms of the bigger picture, Bitcoin has broken the 18-month downtrend in October 2015 by surging above multi-month resistance at $300.

I hope you're familiar with the crash cycle market structure by now, which I introduced in my 2014 post about market cycle, structure, and manipulation. Based on my interpretation of the crash cycle in Bitcoin, it would seem like we are nearing the end of the cycle, or beginning the new pump cycle. According to Jack, the price action we've seen in BTC over the past year or so places us somewhere at the 'disbelief' stage.

If you've been following my blog and twitter account, you'll understand very well that market crash cycles can be found in every corner of the market. With the only similarity between all markets being the human beings behind the money (price), it would be sensible to think that the psychology & emotions behind these humans play a pivotal role in understanding markets and trading.

If we can break this market structure down into 4 easy-to-understand parts, we would come up with something like this:


Relating this to Bitcoin , it seems like the year long accumulation period is over, as $BTCUSD broke above major resistance $300 in October 2015. Based on this, I believe we have now moved into the launchpad phase with our current price action raging between $294 and $502. 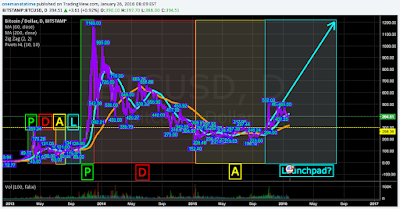 If Bitcoin continues to be the leading blockchain network, it should become widely regarded and generally accepted as the base currency of other cryptocurrencies. My personal view is that Bitcoin and the blockchain are not going anywhere anytime soon.

Click here to get a closer look at the crash cycle comparison.

After the dump from $500, the shockwave and general sideways in the 3-500 range gave time for traders to consolidate their crypto holdings and we have since seen funds flow into altcoins.

Alternative Cryptocurrencies - Are altcoins back?

Are Altcoins back or what? I suppose it pretty much depends on big daddy Bitcoin. #moonsoon pic.twitter.com/nEv75bIFox
— Alvin Lee (@onemanatatime) January 24, 2016

Notice that the altcoin charts in accumulation all look like Bitcoin from 2015 Jan to 2015 Oct. Now that's what I call a bullish chart! Coincidentally, notice that Bitcoin's pump above $300 in Oct'15 was the same time when many altcoins had their final dump and formed a low, before slowly moving up to break out in December/January and later.

Here's a look at some charts of the alternative cryptocurrencies that are the leading the charge in this pump. I would consider these to be Tier-1 altcoins. Presenting: Dash, Factom, and king Ethereum.


And you should have noticed about 3 days ago that MMs decided to pump just about every coin out there:

So here's a few other coins I thought are a good pick for the upcoming altcoin pump. I would consider these to be Tier-2 altcoins, based on technical factors such as trading volume and other fundamental factors like technology, innovation, developer, and community. These include: Monero (XMR), MaidSafe (MAID), VanillaCoin (VNL), and our old buddy DogeCoin (DOGE).

Of all those charts out there, I'm liking $MAID's chances of blowing a 10x from here. 5k on the verge of breaking. pic.twitter.com/A8hIxIEMkp
— Alvin Lee (@onemanatatime) January 26, 2016

With this, it seems like we're still on schedule for the pump leading up to the 2016 Halving in Q3, and it is likely we will see profits from the BTC pump flow into the altcoins. Did you notice that Altcoin volume has surged since October 2015, in the same way that Bitcoin volume has dramatically increased since August 2015? I'm picturing MMs and bulls beefing up their stacks, getting ready to slaughter the bears once and for all.

The altcoin market is very much different than how it was two years ago. There are now so many choices in the market, with all kinds of different innovations, it's hard to keep track anymore. There's hardly 10 coins that look like they can last another 5 years, while the rest are mostly junk clones with various marketing gimmicks, and I believe many of them will die out; those with little innovation will eventually be weeded out by the stronger coins such as Ethereum, and the market should normalize towards having only 1% of the altcoins dominating 99% of the market. And who knows what's to come in the coming years?

In line with the BTC halving in 2016 Q3, ZCash is launching and they're currently the strongest contender for leading the pump for the altcoin markets then, with many big names backing it. So stay tuned and keep a close eye on this one.

My advice is to be versatile and stick to coins with good liquidity, and don't get yourself emotionally attached with any particular coins. Remember that at the end of the day, your goal is to grow your number of Bitcoins, or to increase the FIAT value of your portfolio. Markets, they go up, they go down, so always take profits and forget about the "what ifs". Good luck and may the force be with us.

I know the cryptocurrency markets have been going crazy the last couple of weeks/months, but let's not lose track of the money markets that are driving our current economic system. I'll just briefly touch on three major markets: Crude Oil, Gold, and the S&P 500 Index.

Oil has tumbled to a 12-year low of $28 a barrel on the 20th January 2016, amid tensions in the Middle East, and news of excessive supply. Someone said that this is good for the people because we'll have cheaper gas prices, but heck although oil prices have dropped almost 4-fold, my petrol prices here in Singapore are the still the same! 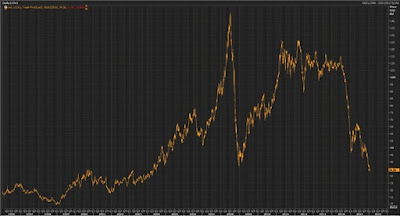 
To end off, let me just leave you with this classic scenario:

Having a plan is one thing. Sticking to it is another. pic.twitter.com/e6cLoZLXCE
— Tom Dante (@Trader_Dante) January 15, 2016

Related Post: $400 Bitcoin - Strong Bull Rally Final Target 600s. May the #crystalball be with us.